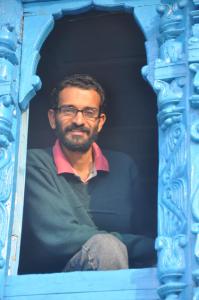 Sumesh is in many ways the origin of Kabani and has worked with social advocacy and research for more than two decades. This work and passion has given him a unique perspective on the implications of globalisation and climate change on the local environment of Kerala.

Throughout his career he has fused this insight with his love for people and local communities and created a wealth of relevant and insightful research. In 2009 he was on the panel for the Copenhagen climate summit where he argued for the importance of local empowerment and autonomy as well as the need for courageous leadership from policy makers. When it comes to the major issues facing humanity today he displays a true optimism and believes that no one perspective is sufficient, but that many different groups must come together if we are to built a just future.
He believes that it cannot be capital that dictates the nature and scope of tourism if it is going to become a tool for development and social progress. Instead it must be the people affected by it that own both the decisions and the profits it generate.

Daniel has a background as a farmer and he is motivated by a love of god and family. He believes strongly in balance and that people are all the same. His work for Kabani goes back to the very beginning of the organisation and the message of the Kabani, to create a different way for travellers to experience India, resonates deeply with his life and beliefs.

He started this line of work as the village coordinator of an organisation called Uravu – meaning wellspring. This grass root organisation was the first incubator of the local home stay initiative and has over the years helped to scale bamboo based craft work initiatives and organic Jack fruit products such as jam and medicine. His wife, Reena Daniel, is also part of this work. Together they have launched an agricultural festival attracting thousands from the countryside and city. These initiatives and Kabani’s work raise important cash flows for the village fund, helping to support local children’s issues and health initiatives.

Every morning he milks his goats and performs Yoga. After selling the milk at the market he prays and sings with his family. For Daniel it is community that gives meaning to life and for him, every family in his village is part of that community.

Oamjie John is a social organiser and researcher with a wide background in grass roots organising and data collection. He is something of a polyglot speaking four languages and studying subjects as wide as journalism, screen plays and counselling. His interests range from philosophy to creative writing and he has worked with issues ranging from climate change and globalisation to women’s rights. The red thread that has run through his life has been an interest in people and the potential of a more just world. With this as his guiding vision he has published twenty articles on the connection between social and environmental issues and has translated books on the importance of spirituality for effective personal development.

His life philosophy merges love and prayer. In his search for explanations and solutions he learns by interacting, observing and reading – critical skills for the work of rural empowerment.